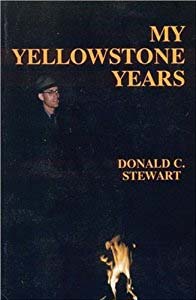 Whenever I learn about a Yellowstone Savage who has written a memoir of their unforgettable experiences living and working in Yellowstone Park, I set aside my cares and responsibilities to acquire and read the book. This was the case when My Yellowstone Years by Donald C. Stewart caught my attention. The book was published in 1989, the year following my memoir, A Yellowstone Savage: Life In Nature’s Wonderland. Stewart was a Savage in 1951, assigned as a dishwasher at Old Faithful. The following season, he became a naturalist Ranger through 1963, while he pursued a PhD in English literature. A career as an English Professor at Kansas State University resulted from his studies.

The preface to this book pulled me in, hand-tied fly hook, line and sinker. He said, “Each year I went out to Yellowstone, physically and mentally tired. Each year I returned, physically and spiritually renewed.” I knew then that this man “got it,” and that his account was bound to be a good read.

Stewart continued. “This, then, is the story of one man’s experience in Yellowstone. But it is also the story of many generations of Americans who had preceded me and who have followed me, either working for the park’s concessionaires or for the National Park Service. No one, to my knowledge, has yet told the story of Yellowstone’s summer ‘savages’ and ninety day wonders. But it is a story worth telling, a slice of Americana that was very special in the lives of all who experienced it.”

In his memoir, Stewart does a splendid job of describing the highs and lows of life in Yellowstone, without overtly gushing about the highs, or whining about the lows. He was fortunate to be assigned to what was then a remote and rustic Madison Campground with his new wife, where they made the best of rough living conditions, developed strong alliances with lasting friends around the evening campfire, and enjoyed fly fishing on the Madison River. He shared enchanting experiences and adventures from the perspective of a freewheeling Savage, then settling into his role as an exemplary ranger and family man.

I hope Professor Stewart became aware of my book, which barely preceded his in publication. Many accounts have succeeded both of ours, each telling a different perspective of Life in Wonderland. Connecting with some of the authors has been a pleasure and especially rewarding. Sadly, Don Stewart has passed on. However, he left us with a valuable piece of history from a time past in Yellowstone Park, which he treasured and shared, including the disastrous earthquake of 1959. I was so engrossed in his story that I could barely stand to put the book down. Stewart nailed it.