As the one hundredth anniversary approaches of the Titanic steamship’s tragic encounter with an iceberg in the Atlantic Ocean during its maiden voyage, I will provide some details about our heroine, Margaret Brown, who consequently became known to us as the Unsinkable Molly Brown. After all, she is the inspiration for this Unsinkable blog, which celebrates her story and Western history.

If you believe in fate, you will appreciate the circumstances that placed Mrs. J.J. Brown on the Titanic in April 1912 during its ill-fated voyage from Liverpool, England to New York City. Margaret was vacationing in Egypt with the Astors, her wealthy friends from the American East Coast. As usual, she was learning about a different culture and living it up by immersing herself in the sights, history and activities of Egypt, including a ride on a camel. In keeping with her adventurous spirit, she could not pass up a conversation with a gypsy fortune teller, who warned her of impending danger from icy, cold waters. Not likely in the hot, sandy dessert, she thought. 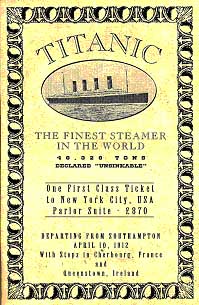 When she received a telegram from home with news that her little grandson was ill, Margaret did not hesitate. She cut her travels short and made plans to return home right away to learn his condition and offer whatever support was needed by her son’s family. Her daughter, Helen, who was a student at the Sorbonne University in Paris, had obtained a ticket aboard the Titanic to return home. She gladly turned it over to her mother, to allow her to return to the United States more quickly to check on her grandson. Helen would happily spend more time in Paris. Little did she know that the decision would save her from a potentially fatal ordeal in the icy waters of the North Atlantic, and place her mother, who took her place, in tremendous peril. Although owners of the Titanic bragged that their new steamship was unsinkable, their boasts turned out to be gravely untrue. Instead, as a result of her part in the impending disaster, Helen’s mother became known as the Unsinkable Mrs. J.J. Brown.