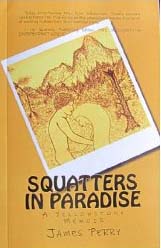 James Perry cuts loose in his memoir of twenty-five years as a concession employee in Yellowstone National Park. Although his outlook is often jaded and sometimes sarcastic, his viewpoint is honest as he withholds very little in describing life in the nation’s oldest and largest national park. My outlook in A Yellowstone Savage: Life In Nature’s Wonderland is decidedly more optimistic, as he readily points out with a funny jab about the potential for singing Kumbaya around the campfire in my version. Although our voices and tones differ, we share an honest love and reverent respect for Yellowstone, a place where hardy souls endure sometimes unforgiving working and living conditions for the privilege of calling it home.

I enjoyed noting the differences in lifestyle of new age “Savages,” concession employees that he sometimes refers to as “Parkies.” Mobile satellite dishes?? Technology has intruded. I also noted a plausible theory about the origin of Yellowstone Christmas, considering documentation of the traditional version is vague at best. So much food for thought. James and friends’ invasion of the CUT (Church Universal and Triumphant) compound was brazen and delightful. What an adventure! I tip my Savage hat to James. I was leery that this might be an angst filled tirade, but it came off as more honest and straightforward than diatribe. Bring on more memories, Savages! There’s plenty of room.

My book, A Yellowstone Savage: Life In Nature’s Wonderland, was published in 1988 in trade paperback, and was published as an ebook in 2013.

This was the first Savage memoir of its kind, initiating a cult following, and inspiring others to publish, preserve, and share their own stories and versions of their memories and life in Nature’s Wonderland.