Most western writers and history buffs I know enjoy watching a good Western movie. An article caught my eye in the December 2014 issue of Roundup Magazine from the Western Writers of America. The title was “Twenty Significant Western Movies (1903-1969)” by David Morrell. As usual, the magazine’s list was thoughtful and thought-provoking. I was surprised that I had missed so many of the titles, and promised myself to fill in the gaps. Here is the list: 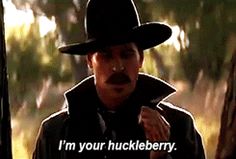 As this list ends, so does the Golden Era of Westerns. Many enjoyable Westerns have been made since then, although formed and fashioned for modern audiences and box office success. Butch Cassidy and the Sundance Kid, also made in 1969, is a perfect example of combining clever entertainment with a quirky Western drama. Another favorite is Tombstone, in which I discover brilliant new quotations from Val Kilmer’s Doc Holliday every time I watch. Then there is Lonesome Dove, which steps away from the movie format for extended, in-depth exploration of character and story. Another movie that won this writer’s heart was True Grit. John Wayne was brilliant throughout his career, but took it to new heights in this story of Marshal Rooster Cogburn’s comeback to combat evil. Great stuff. When it comes to great Westerns, I’m your huckleberry.