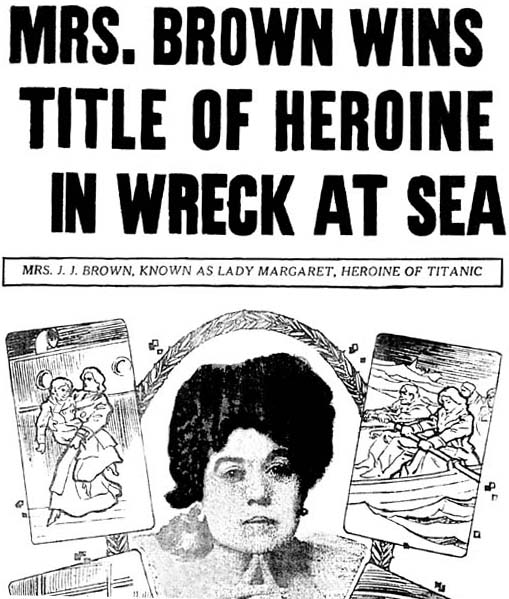 One of the most remarkable facts about Molly Brown is that her name was not Molly Brown. How did it come about that such an iconic western heroine became known by a name that was not her own?

On July 16, 1867, Margaret Tobin was born into a large Irish immigrant family in Hannibal, Missouri, near the banks of the Mississippi River. The 1870 U.S. Census lists her as Maggy Tobin, age 3, with her family. In Leadville, Colorado, James J. Brown and Margaret Tobin were joined in marriage on September 1, 1886. After that, our subject was known as Mrs. J. J. Brown, or Margaret Brown. She was referred to as Lady Margaret in the Denver newspaper during the aftermath of the Titanic Disaster. In notes she wrote to her housekeeper in Denver, she occasionally simply signed “Brown” in her bold, scrawling script. Although long separated from J. J. Brown, Margaret never strayed from the Brown name.

Modern media is attributed with the popularity of the Molly Brown story, and to the nickname which stuck to its main character. In 1960, a frothy musical called The Unsinkable Molly Brown was introduced to Broadway theater patrons. The success of the play was followed closely by a movie production of the same name, in which Debbie Reynolds portrayed a singing and dancing Molly Brown. The feature motion picture film took broad liberties with the reality of her story in addition to the name change. Broadway and Hollywood supposedly changed the name from Margaret to Molly to make it more melodic for singing and dancing in the musical. As a result of broad success and a vast audience, the name stuck and was adopted as factual by many fans.

In reality, the name, Molly, was used in reference to Margaret Brown much earlier. When she died in 1932, an obituary by Jack Carberry of the Rocky Mountain News referred to Margaret as Molly Tobin, then Molly Brown, in a glib account of her story of growing up as a tomboy by the Mississippi River. The name “Molly” was meant as a slam to Margaret’s background as a poor Irish girl in an article full of legends and liberties. One such myth was that Mark Twain pulled “Molly Brown” from certain death in the riverbank during a fishing trip. The two characters probably never met, certainly not in Hannibal where they lived at different times, especially after Margaret acquired the Brown name.

The difficulty continues once you become aware of the facts surrounding Margaret’s name. The name Molly Brown is so wide-spread and well-known that it is difficult to avoid, even when doing research. The trick is to figure out how to bite your tongue when you hear her referred to as “Molly Brown”, or to find a way to politely correct and educate the offender about the truth and the correct usage of the name without committing additional offense. Chances are Margaret might not mind. After all, she was fond of saying, “I don’t care what the newspapers say about me, as long as they say something.”

Joyce B. Lohse
Learn more about MARGARET BROWN from my book,
Unsinkable: The Molly Brown Story
www.LohseWorks.com or www.FilterPressBooks.com