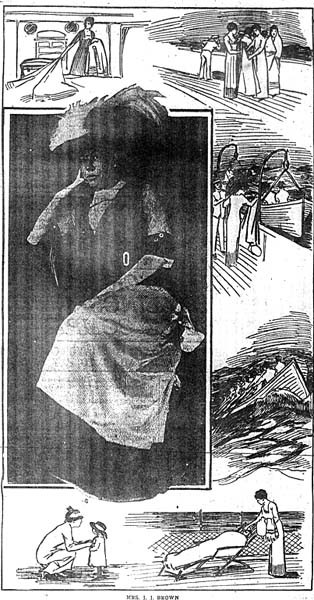 Before we move on from the Titanic disaster and Margaret “Molly” Brown’s heroic actions as a survivor of that tragedy, it is important to note that her life following that event was full of activism. She must have known as she fought for survival that she still had much to do during the rest of her life. Her immediate concern was for other survivors who lost their belongings and loved ones, and suffered terrible losses and difficulties. She organized a survivors’ association while still on the ship, and stayed on the rescue ship Carpathia until each person received care, was allowed to send translated messages to their loved ones, and she made sure all had a place to go from the port in New York City. Although she wasn’t invited to include her testimony with other survivors before a Congressional hearing, she used her connections to tell her version of the story in Denver newspapers. She helped organize a memorial for those who perished, and arranged special recognition of the crew of the Carpathia for coming to the aid of survivors.

The following year, Mrs. Brown briefly ran for Congress until it became apparent that she had no chance of winning her campaign. The following year, she organized Denver women to send supplies and assistance to poor mining families following the Ludlow Massacre in Southern Colorado. While visiting southern Florida, she led guests of the Breakers Hotel to safety when fire broke out. She turned her house in Newport over to the Red Cross during World War I, and traveled to France to help there with the war effort. She helped injured soldiers when they returned from battle, earning the French Legion of Honor Award. She attempted to organize a female military troop, and succeeded in establishing a female coalition for mine operations in Leadville. She supported the arts by organizing art collection displays, and helped mentor young women studying drama. When her life ended, previously arranged gifts arrived for struggling mining families in Leadville, so their families would have presents to open for Christmas. Her life, which continued to be full of adventure, was that of an involved person with intelligence, spirit and purpose.